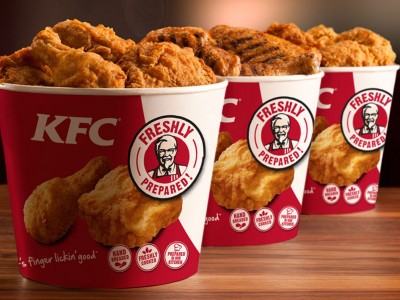 If you wish to complain to KFC about their food or an experience in a store, call the complaints line on 0844 409 6467. They have some useful information on their website that can help in the complaints process.

KFC has become the ‘de facto’ name of this fast food company having previously been shorthand for ‘Kentucky Fried Chicken.’ It is the world’s second largest restaurant chain after McDonald’s (measured by sales).

in one of the most oft-repeated ‘starting at the bottom’ business growth stories, KFC was founded by Harland Sanders (who branded himself ‘Colonel Sanders’) when he sold fried chicken in his special recipe seasoning from a roadside restaurant in Kentucky. He pioneered not only his secret recipe but a way of cooking the chicken so as to prepare it quickly but retain the benefits of the slower, deep pan frying method.

He identified the potential in the franchising concept and the first opened in 1952. KFC popularised chicken as a fast-food dish and competed with traditional favourite the hamburger.

The speed of growth overwhelmed the ageing Sanders, and he sold the business in the mid 1960’s when there were 600 restaurants open, although his image and branding lives on to this day. KFC expanded into overseas markets, and became the first western restaurant chain to open up in China. Eventually, the chain was taken over by PepsiCo.

KFC’s original dish was the archetypal pieces of chicken covered in Sanders’ seasoning, but the menu expanded to offer other chicken products such as wraps and fillet burgers along with salads and soft drinks.

The brand had one of the most famous advertising slogans of all time with its “finger lickin’ good” which was used for several years.

The KFC name was officially adopted in 1991, partly in a move to distance the brand from the unhealthy image of the word “fried.”

KFC is now a subsidiary of Yum!, one of the largest restaurant firms in the world, and in 2013 chalked up sales of billion. As of December 2013 there were well over 18,000 KFC outlets in 118 countries and territories worldwide.