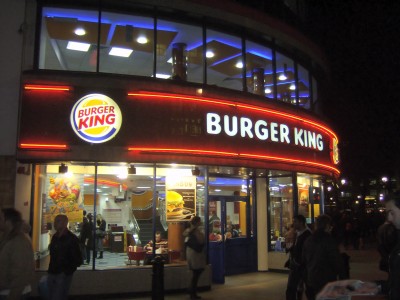 You can complain to Burger King on 0844 409 6466 if you have a grievance relating to food purchased and/or an experience in one of their stores. The company can be contacted by other methods such as email or post - and the company welcome a personal visit to the store in question to speak to someone in authority.

Burger King is an international chain of hamburger fast food restaurants with around 13,000 outlets in 79 countries (2013 figures).

Burger King has its origins in 1953 Florida when, influenced by the original McDonalds store in California, the co-founders opened their first restaurants naming them ‘Insta-Burger King’ after the ‘Insta’ machine that made the burgers.

They grew the business through the franchising model where individuals bought the licence and know-how and ran a store to a tightly defined company blueprint. In 1959 two franchisees bought the company and re-named it simply ‘Burger King.’ They ran it for eight years and expanded it to over 250 locations in the United States before selling to the Pillsbury Company in 1967.

Over the years since, Burger King has had a generally turbulent time with various changes and attempts to keep up with chief rival McDonald’s. There have been a number of revamps, menu revisions and changes of ownership.

The franchising business model used to grow the company originally has persisted over the years, and now around 90% of Burger King restaurants are franchises.

The company’s most famous brand is the ‘Whopper’ burger which was introduced in 1957, only a few years after their founding. The Whopper brand has formed the foundation of much of their advertising. The new kiosk-type restaurants are even named ‘Whopper Bars.’

In common with other fast food companies, Burger King have diversified their product line from a core line of burgers. Chicken and fish products are available along with, for example, desserts such as pancakes, pies and muffins and ‘breakfast style’ offerings.

Although many Burger King restaurants are franchises and thus individual businesses, you can complain to the company centrally on the complaints line 0844 409 6466. You can also complain via post, email or by calling in to the restaurant in question and speaking to someone in authority.